Recently I had rights returned for ten books when Samhain Publishing finally (FINALLY) closed their doors. If you were on my social media, you probably saw the picture I posted of the moment when I got the email releasing my rights: 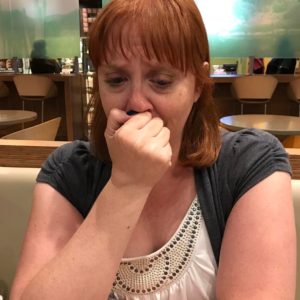 The emotions you’re seeing here are relief, joy, and disbelief. It was a long journey to get these books back. One that started at the end of last February when Samhain first announced they would be closing and all rights returned to authors. I was thrilled and we began preparing for that day. Then they pulled the rug out from under all of us and changed their mind. For almost a year I waited, I offered a buy out and was refused and I watched with growing frustration as lower and lower royalty payments came in from these books. Not only that but certain parties blamed everyone in the universe (including the authors) but themselves for that .

And then, the second announcement came in mid-February of this year. But could it be true? I wasn’t ready to believe it until I had the reversion in my hand. Finally, here it was. In my hand. What followed was us scrambling to get the books back up under our independent umbrella (we’d already been reformatting for weeks in preparation). They’re all back up now and selling REALLY well, so thank you for that.

In the end, what comes out of this nightmarish experience are a few things. First, I cannot and will not ever go back to traditional publishing. Though I worked with some great people, especially at Pocket and Hachette, my experiences on the whole have been disappointing at best, soul crushing at worst. My indie path is a lot more work, but the financial and emotional rewards have been so much higher.

Secondly, my husband said something to me one day this past week as we examined the bump in the re-release sales alongside the wonderful success of The Daring Duke. He said, “You couldn’t have had one without the other.”

And hard as it is sometimes to remember that when I was dealing with piles and mounds of ridiculousness, he is absolutely right. If I hadn’t written a novella for Red Sage Publishing over a decade ago, one that won’t revert back to me until death or bankruptcy…I wouldn’t have likely been approached to help launch the Red line for Avon. If I hadn’t helped launch the Red line for Avon, a publisher that once told me I wasn’t a good enough writer to hit a bestseller list (I’m a multiple USA Today Bestseller independently), the audience and infrastructure might not have been there to write for Samhain.

If I hadn’t written for Samhain, I would have quit writing. I was in an incredibly low point of my career in 2011 when we sold the Mistress Matchmaker series to Samhain. I had been ravaged emotionally by an extremely negative set of situations at Avon, the failure financially of my zombie series and a lack of understanding of what I needed to do to go indie. I was looking into going back to school when Samhain made their offer. But An Introduction to Pleasure did so well. It gave me my confidence back.

That confidence, in turn, helped me see when my comfort level at the publisher had gone down in 2014. It helped me terminate the contracts for the books that would become The Notorious Flynns series, which I published on my own in 2015 and The Widow Wager (my third book in that series) hit the USA Today for the first time. It helped me launch an indie career that is sometimes like balancing on a high wire with no net, but has also been successful in every way I could have ever imagined.

I suppose that is the lesson of life in general, not just writing or publishing. The path that we’re on doesn’t always feel smooth, but when we continue walking it, it goes somewhere. Opportunities come up, but only if we’re looking. So if you’re on the path and it’s feeling rocky and you just want to hit a punching bag for like seven or eight hours straight while you rage scream?

Well, you just might be about to step into a whole new world. Maybe you don’t know it yet, but you couldn’t have whatever is coming next without whatever you’re going through now.