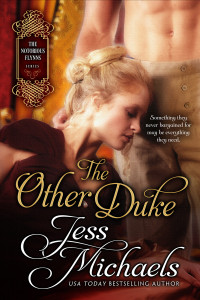 For years Serafina McPhee has been engaged to marry the heir to the Duke of Hartholm and for almost as long, she has been struggling to find a way out of that engagement. When he suddenly dies, she does not mourn but thrills at the idea that she will be free. Unfortunately, best laid plans go awry when the next in line for the title, her intended’s cousin, Raphael “Rafe” Flynn is forced to take over the engagement. But Serafina knows Rafe’s reputation as a libertine and wants nothing to do with him, either, even if he is devastatingly handsome.

She proposes an arrangement: she will agree to the marriage and provide Rafe with his heir and spare. Once she has done her duty, he will let her go. Rafe is intrigued both by her beauty and by her utter disgust with the idea of being his bride. Women normally fall at his feet, not cringe away from him. However, since their arranged marriage is not something he can escape, he agrees to her terms.

But when he finds out on their wedding night the truth about her torture at the hands of his predecessor, he finds himself driven not just to fulfill his bargain with his new bride, but to introduce her to desire. While they move closer together, surrendering to wicked pleasures, dangerous emotions may violate every agreement they’ve made.

Available as an audiobook!

Be sure you’re on my newsletter list for all the news!