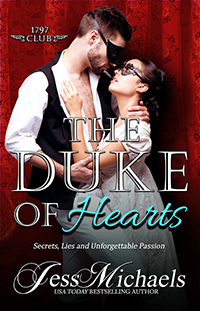 Matthew Cornwallis, Duke of Tyndale, once loved a woman, but she died in a tragic accident he felt responsible for. Since then, he’s been playing pretend that he isn’t broken inside, even as he’s seen as London’s most sought after bachelor. He decides to drown his sorrows at the notorious Donville Masquerade where he encounters an alluring stranger who he spends the night with.

Mrs. Isabel Hayes was married once to a man who did not inspire passion and she’s been curious ever since. She has no intention of taking a lover at the Donville Masquerade, but to watch the activities there, just as she has been for weeks. But once the masked stranger pursues her, she is swept away.

Soon Isabel recognizes her lover for who he really is and realizes a terrible truth. She is the cousin of the woman he once loved and lost, and her family blames him for what happened. Driven by the passion they’ve shared, but also repelled by the stories she’s heard, Isabel continues the affair, trying to find the truth. But once Matthew realizes her identity, will he pursue her for what they’ve built, or only because she reminds him of what he lost? And will he survive to share a life with her at all?