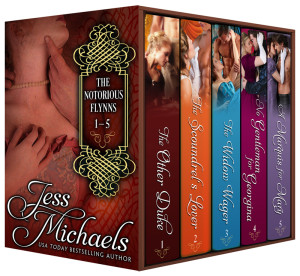 Save almost $8 off the retailer cover prices of The Notorious Flynns series by buying their bundle TODAY:

A new duke with an inherited bride, a lady with a secret desire and a gentleman determined to destroy himself. Along with their friends, the Flynns are not your average family. Pick up the bestselling series readers are raving about.

The Other Duke: Rafe Flynn has just inherited an unexpected dukedom and an unwilling bride. Can he overcome Serafina McPhee’s troubled past and prove to her that love is worth fighting for?

The Widow Wager: Crispin Flynn has been riding a dangerous path to ruin since he lost the woman he loved. But when he wakes up with widow Gemma Quinn in his bed, he just might have to change his way of life to win her.

A Marquis for Mary: Mary Quinn is almost out of time. If she cannot find a proper husband before the end of the Season, she will have to return to her father’s home and his dangerous plans. But a stolen kiss in the garden with the handsome and troubled Edward, Marquis of Woodley, may solve all her problems and put her on the path to the love of her life.