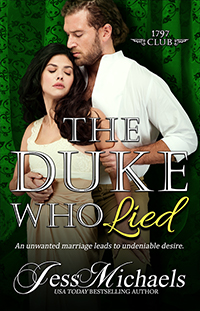 Hugh Margolis, Duke of Brighthollow, has been keeping a secret that eats him up inside. His beloved sister was seduced and nearly destroyed by a wicked man. The trauma sent her into exile and to protect her reputation, he never did anything about it. But now the ‘gentleman’ is back in Society and recently engaged to another lady.

Lady Amelia Quinton cannot believe her luck. After a whirlwind courtship, she has just become engaged and now she’s looking forward to a true love match. Only all her plans come to a screeching halt when her father announces she is now to marry the Duke of Brighthollow because he owns her father’s debts.

Amelia is horrified, for Hugh is nothing like the sweet and gentle boy she wanted to marry. But once their vows are said, passions flare and she begins to know the man better. Little by little, both their walls come down and feelings grow. Until she finds out he lied. Will Hugh ever tell her the truth and will it even matter by the time it’s all said and done?