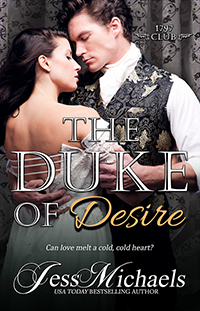 Robert Smithton, Duke of Roseford is known for his lusty appetites and his cold, cold heart. Still thanks to his title and his fortune, everyone wants him and he’s bored of it all. He wants something, but he cannot place what exactly that is. Until he meets Katherine, the Countess of Gainsworth.

Married for six months to an old man who died when they were making love, Katherine is just returning to Society. Although scandal follows her, so does interest, as the men of Society wonder about her prowess if it could kill a man. When Robert begins to pursue her, she is horrified. After all, she blames him for the circumstances that sent her into her loveless marriage in the first place.

When Katherine ignores him, Robert only pushes harder and ultimately she begins to wonder if revenge is a dish best served through desire. What she finds when she touches him at last is pleasure unlike any she’s ever known, and a connection she does not wish to feel. Now she must decide if she wants revenge or happiness and Robert must determine if love is worth fighting for.