Book 2 in The Scandal Sheet Series 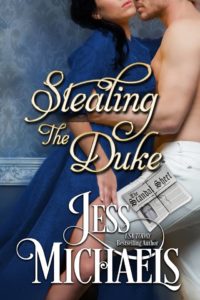 When the Earl of Martingale died, his daughter Marianne discovered he had been stealing. When she tried to return the items, it only created a scandal that could destroy her and her beloved younger sister. Now she’s found one more item and decides to just sneak it back to the victim in the hopes to keep her disgrace from growing.

Alexander Wittingham, the Duke of Avondale, has isolated himself since his sister died. But when he catches the fetching Marianne trying to return his sister’s stolen broach, her presence awakens desires in him, longings he hasn’t allowed himself to feel in years. When he realizes her dire straits, he makes her a shocking offer that could save her…if she’s willing to surrender her body.

Their affair draws them close physically…and emotionally. But will Alexander ever accept Marianne to be more than his lover? If he does, will it be too late?