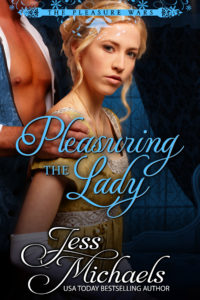 Once the game begins, there is no tearing your gaze away.

Her mother’s madness and her father’s and brother’s irresponsibility have relegated Lady Portia to the life of a wallflower. The only shining light in her life is her best friend, Ava, who is suffering a rift with her own brother.

Portia’s quest to help takes her to the notorious Donville Masquerade in the hells, where—behind the safety of a mask—she witnesses shocking public acts of sin. And succumbs to the touch of Marquis Miles Weatherfield.

Unfortunately, they’re discovered. And now, tainted by scandal, she and Miles are destined for a marriage neither of them want. But Portia makes a bargain that raises even Miles’s eyebrows.

In return for saving her mother from the asylum, Portia will do anything Miles wants in bed. Shocked by his driving desire for Portia, Miles agrees. As they explore every wicked desire, every forbidden act that pleases them, they discover something that goes far deeper than flesh. But the lies that brought them together could be the very wedge that drives them apart.

Miles stood stunned as Portia’s lips collided with his. But he couldn’t deny how powerfully he reacted. Her technique was artless, innocent, but there was simmering passion in her touch that could not be denied. He wrapped his arms around her waist and drew her closer as he tilted his head and parted his lips to taste her.

She hesitated, and he drew back to look down at her. She had a dazed look on her face that both intrigued and troubled him. He didn’t release her, but he whispered, “Portia, I don’t wish for you to do things you don’t want to do in order to repay a debt I do not place upon you.”

His voice was rough with need he doubted…or hoped…she didn’t fully understand.

She blinked, and he waited for her to extract herself from his embrace, but she didn’t. She simply looked up at him, her lip trembling, her warm body still in his arms.

“I cannot tell you that I am doing something I don’t wish for with all my heart.”

The soft power of those words had blood flowing to a rapidly hardening cock. One that wished to be buried to the hilt in the flexing wetness of her slit.

“But,” she continued, her gaze darting away. “I also cannot tell you that my kiss isn’t offered as a repayment of a debt. A gift to somehow match yours, though it can never mean as much to you as what you are doing does to me. But my kiss, my body…it’s all I have. So won’t you take something from me in order to balance the discrepancy your kindness has created?”

Once again, the faint gentlemanly urges deep within Miles whispered to him to release this woman. To stop himself from taking advantage of the offer she made after a lifetime of cruelty from other men.

But that voice was very quiet and easily squashed by another, louder one. One that told him not to take as she suggested, but to give. To bring this woman pleasure so powerful that she was weak in his arms and even more ready for the debauchery he intended to entertain once she was his wife.

“You are a temptation I never expected,” he drawled as he lowered her to her back on the settee. “How could I have never seen it before?”

“No one saw me,” she murmured, and he saw a flash of pain in her gaze before she turned it away.

“Well, I see you now. So very clearly,” he growled before his mouth was on her a second time.

5 Responses to "Pleasuring the Lady"