This week we welcome Delilah Marvelle, whose sexy historical series The School of Gallantry is a favorite amongst a lot of you. Soooooo….. here’s Delilah: 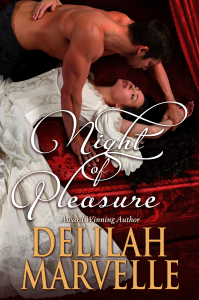 For those of you who don’t know about my School of Gallantry Series, please allow me to give you the quick lowdown of what you can expect. It’s a very quirky, very sexy historical romance series about couples who in one form or another get pulled into a “school” led by a retired French courtesan who educates men in the topic of love and seduction. It’s cheeky and believe it or not “The School of Gallantry” is based on real history.

The inspiration behind Madame de Maitenon, my silver haired retired French courtesan and headmistress of the School of Gallantry comes from a real life figure, Ninon de L’Enclos. I stumbled across her name during some research for another book and the more I unearthed about this woman and her personal history, the more I realized I *had* to create an equally fascinating character and a series around her.

Ninon de L’Enclos was born in Paris in 1620 and came from an interesting family. Her father had been exiled from France for participating in a duel. When her mother died, and having no siblings or family, she decided to enter a convent. Of course, Ninon didn’t last very long and a year later, she left the convent and decided to strike out on her own using her wit and her body to make her fortune. And she was a huge success. How did she decide to go from convent to courtesan? The one thing Ninon wanted was to remain unmarried. That left a woman only one of two choices back in those days to survive. She either went into a convent or turned to the life of a courtesan. She figured out pretty quickly that there wasn’t any fun to be had at that convent…lol.

Once Ninon went out into the world, she actually became well known for her passionate involvement in the literary arts, not just the sexual arts. She interacted and encouraged writers such as Molière to fame and even left money from her estate to her accountant’s son, Francois Arouet, better known to the world as Voltaire. Voltaire has Ninon herself to thank for his education. Without the money she had left him, who knows if we would have ever heard of him. This is why my readers will see references to Voltaire sprinkled throughout my School of Gallantry books. Because it is my ultimate nod to Ninon de L’Enclos.

After reading all about her life, and all of her letters, it was the older Ninon who ultimately fascinated me. She took on many lovers throughout her life, but never more than one at a time and involved herself with powerful, wealthy men, such as the King’s cousin and dukes. Perhaps the most heartbreaking, yet fascinating is the story about her son. Ninon involved herself with a wealthy, powerful man and bore him a son. This man took the son from Ninon and asked that she never disclose herself as being the boy’s mother. She agreed and watched her son grow up from a distance. Imagine her astonishment when her fully grown son appears at her door one day and ardently pleads to her if she’d take him into her bed. Ehm. Talk about awkward. At first, she simply denied him and brushed him off, hoping that his pride would simply squash whatever hopes he had. But her son was so obsessed and so in love with her that he simply wouldn’t give her peace. Ninon knew she had to reveal the truth to him if only to get him to stop. When she revealed the truth, her son committed suicide that same day by impaling himself on his own sword. It was a tragedy that haunted Ninon for the rest of her days. A tragedy I made sure that my own character, Madame de Maitenon lived with.

Because such tragedies often lead to great wisdom. (Don’t we know it…) she thrived on using her experience and applying it to her world. When she wasn’t bedding her current lover, she held literary events and discussions with aristocratic men having to do with philosophy, life, love, and sex. It was a “school” of sorts she had created and she had quite the following of men. In the early stages of creating my books, I decided to take these “discussions” of hers with men and turn it into an actual school. Hence the creation of the School of Gallantry.

Without a doubt, Ninon was known for her quips and wit. She had great sayings like, “Much more genius is needed to make love than to command armies.” And my favorite “The resistance of a woman is not always a proof of her virtue, but more frequently of her experience.” These fabulous quotes of hers gave me ideas upon ideas as to how my imaginary school should be run as well as the sort of quotes I wanted to see at the beginning of each chapter within my books. Hence the lessons. Call it a tribute, if you will, to the fabulous Ninon.

What is perhaps the most fascinating aspect of Ninon and why I created an elderly courtesan for my series as opposed to a young one, is that the older Ninon got, the more sought after she became by men. Unlike most courtesans who were all forced to retire due to age and lack of beauty, Ninon’s circle of admirers grew because they simply could not get enough of her wit and charm. Even women flocked to her for advice. One of my favorite stories about Ninon is when she was approached by a young gentleman who desperately wanted to bed her, but she really didn’t care for him. So she told him, “When I turn 80.” The man was so obsessed with her, that he waited, and when she turned 80, he showed up at her door saying it was time. Ninon was so amused by the man, she bed him for the hell of it. Her approach toward life and the amount of wealth and power she acquired in her lifetime is beyond the comprehension of even a modern woman. I hail her for this alone. Ninon died at 84 and left her vast fortune to friends and admirers.

I would also like to add that Madame de Maitenon also shares a lot of characteristics with own grandmother. My grandmother is a retired opera singer who once had the honor of singing with Pavarotti. Even though she is in her 70’s, she looks like she’s 50. Men of all ages stare at her and drool because she wears things I know I could never pull off. Amusingly enough, she has always oozed of sex but could never say the word sex. She always refers to sex as “Poom-poom.” And this is exactly why my French courtesan says “Poom-poom” because she is a combination between Ninon and my grandmother. And yes, my dearest grandmother knows I ripped off her antics and is rather pleased with it, lol.