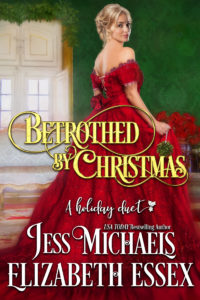 A madcap plan to avoid marriages they do not desire leads two women to romance and passion they don’t expect in a duet of novellas by bestselling authors Jess Michaels and Elizabeth Essex.

A Lady’s Gift for Seduction by Jess Michaels
Lady Evangeline is a Diamond of the First Water, but she fears her father will match her to his own advantage, not hers. She decides marrying a biddable groom is the only way to salvage her future and chooses her old friend, astronomer Henry Killam. But she soon realizes Henry isn’t quite as manageable as she first believed and her feelings for him are stronger than she ever imagined.

A Lady’s Gift for Scandal by Elizabeth Essex
Miss Tamsin Lesley desires above all else to be a bluestocking and lead an intellectual life. The only thing standing in her way is her father’s heir, who wants her along with her father’s estate. To foil him, Tamsin enlists the services of masculine wallflower Simon Cathcart to ruin her. But the road to ruination leads to far more pleasurable places than Tamsin could ever imagine, and her charming wallflower proves to have secrets of his own.