So obviously, I had to do some research.

As I read, I often asked myself what makes this story erotic, and I struggled to come up with a clear answer. The heroes were roguish and noble and everything in between. The heroines were debutantes seeking adventure, courtesans, wives, widows, complete innocents, women with more knowledge than experience and women with more experience than the hero. In many cases, the sex did seem more straight-forward with less euphemisms and the use of more slang terms, though again, this was not true across the board. The heroines generally tended to be more relaxed about the exploring their sexuality despite the social dictates of the time, even the innocents.

Of the titles I had chosen, the hero and heroine were monogamous once they began their relationship. (In one, the hero thought he was with another woman, but it was actually his wife in disguise.) I could say there were more sex scenes than an average HR and that the first sex scene came earlier, and while that was true in some of the titles, it was not for them all. In a couple, there were elements of voyeurism and in one there was also some bondage, sexual gameplay, and an orgy, though the H/h only observed and did not participate.

A common thing I noticed…likely what makes all of these stories Romance, is that the H and h are truly meant for each other. Whatever their background, however they came to be together, whatever their original intentions had been, they fall in love and commit to each other.

I still have more reading to do (much more *wink*), but so far, I have not really been able to settle on what I feel is a good description of the difference between HER and HR. What throws me off is that so many of the things I noticed in the EHR I read can also be found, perhaps to a lesser extent, perhaps not, in books defined as HR. While most HR do go with an innocent heroine, that is not a hard and fast rule like it may have been a few decades ago. The heroines of HR come from various backgrounds and experience levels.

Although the inclusion of certain elements (mentioned earlier) would clearly tip the scales, there seem to be just as many instances where the difference between EHR and HR seems less about specific content and more about intention maybe, or tone, or maybe something else…

Amy’s love of romance began one summer when she was thirteen and complained of boredom. She ended up with one of her mother’s Barbara Cartland books and an obsessive interest that expanded from there.  Her affinity for writing began with sappy pre-teen poems and led to a Bachelor’s degree with an emphasis on Creative Writing from the University of Minnesota – Twin Cities.

She writes in the early mornings while her young kids are still asleep and dreams of a future when she can write all day instead of going to her “other” job. In the evenings, Amy is a full-time wife and mother who enjoys pizza, wine and dark brooding heroes … namely, her husband. 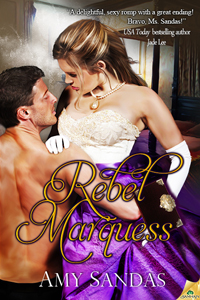 Amy’s latest release is REBEL MARQUESS available in electronic format from Samhain Publishing and other ebook retailers. Here is a little blurb:

Eliza Terribury is determined to be the first of her sisters to evade her mother’s attempts to shoo her down the aisle. Her novel-writing dreams will wither under the demands placed on a gentleman’s wife.

Saddled with his title at a young age, Michael Gerard, the elusive Marquess of Rutherford, has always done his duty, but he will not be pressured into choosing a wife. He just never expected the rush of attraction every time the impertinent young Eliza crosses his path.

When a completely innocent incident leaves Rutherford’s hands in a compromising position on Eliza’s bare skin, they have no choice but to announce an engagement. Privately, they agree to seek a way out of the unwanted nuptials.

Yet Eliza’s free spirit and understated sensuality stirs Michael’s desire. And Eliza discovers there is more to the arrogant lord than meets the eye, especially when she wonders if it is purely her writer’s imagination that puts his face behind a mysterious highwayman’s mask.

You can find Amy on her blog at http://amysandas.wordpress.com